Our Lady’s Hall (http://www.ourladyshall.com/)  is the Parish Hall of the Parish of Our Lady of Good Counsel. Vested in the Saint Laurence O’Toole trust of the Archdiocese of Dublin it is licensed since 2010 by agreement of the Parish Finance Committee, to a management committee consisting of representatives of the Parish and various community representatives.

When Our Lady’s Hall opened on October 30th 1955, the Parish Priest at the time, Fr. Dan Delaney, stated that he had a very special purpose in mind when building the Hall. It was to be a Community Centre where entertainments provided would be Catholic and Cultural; where parochial talent would be fostered and have an outlet, but above all it would be a centre where he hoped a parish spirit would be nurtured and developed.The provision of excellent dances, properly controlled and conducted, and for which only the top show bands would be engaged providing ample entertainment and opportunity for young people to enjoy themselves. It was not surprising on Sunday nights to see a long queue outside the Hall turning up for admission and unfortunately, on many occasions, some had to be turned away.  Monday night was “Parish Night”. Talent competitions were held periodically and these competitions covered not only the youth of the parish but also special competitions were held for mothers and grandmothers.

Tea, coffee, minerals, sandwiches, cakes, ice cream, cigarettes, chocolate and sweets – you name it, all were there to facilitate the patrons. This was all made available by the parish voluntary workers, both male and female, who gave generously of their time and efforts.

The formation of the Community Players and choir enabled many plays and musical entertainments, including the well known Gilbert & Sullivan musical”The Mikado”, to be presented. School concerts, organised by the Teachers and Mercy Sisters, took place in the Hall and were very enjoyable.

Pantomime was an annual feature in the Hall, and while most of the cast were from the parish, they were fronted by professional artists such as Hal Roach, ChrisCasey, Val Fitzpatrick and many others. The dancing in all the shows was provided by the Freda Bannon School of Dancing. Freda herself was a parishioner. Irish Dancing Feiseanna were held annually and were always well supported.When the taste for dancing and variety shows fell away, the Hall was used by the Musical Society, the Ladies Club, the Badminton Club, for Bingo and Irish Dancing Classes, and more recently by the Active Retirement Association and Set-Dancing. These are now regular activities in the Hall and many other events take place periodically.

No history of Our Lady’s Hall would be complete without a serious reference to the Drimnagh Musical Society. In 1993, to coincide with the Golden Jubilee of the Parish of Our Lady of Good Counsel a fine essay was written outlining the History of the Society and what better way to record it than to allow the author to say it in his own words.

(As you read the following, bear in mind it was written in 1993 for the audience of the day and the use of present tense must always be interpreted with that in mind)

Some of the members present on the first night were Nellie Giles who became the first Secretary of the Society, Paddy O’Malley, Frank Ennis and Jimmy Ralph. The Society is (in 1993) one of the oldest organisations in the Parish with a membership of over 50. Their first show was “The Mikado”, produced by Frank Porter who also played the part of Ko-Ko. The musical director was Sean Creamer.

The show was such a success they decided to do another Gilbert & Sullivan show,”The Gondoliers”, but halfway through rehearsals Sean was transferred to Sligo by the Department of Education, and so “The Gondoliers” was put on hold. Shortly afterwards along came Fr. Casey who took over the Society and it was full steam ahead to their next show, “The Desert Song”, and what a show that was! It ran for ten nights to full houses.

Do you remember the night the Donkey made his debut? He was not going to be upstaged by anyone on that night so on making his entry on stage he did so with a bang to the delight of the audience and as a result, someone’s garden is still blooming in Drimnagh.

Our production team was Pat and Joe Flood; musical Director Capt. Fred O’Callaghan. The Society went from strength to strength. We now had a Secretary in the Society, Una O’Neill. Una was to be followed three years later by her sister Nora who also became Secretary. The O’Neill family did great work for the Society over the years, and so many more shows were to follow with such notables as “The Quaker Girl”, ” Arcadians”,”Merry Widow” and “Oklahoma” to mention but a few.In November 1965 “Calamity Jane” came to Drimnagh with Vera Morgan and Austin Gaffney. It ran for ten nights to full houses.

The Evening Herald said of it “Big success with Calamity Jane in Drimnagh” -and it was too. Do you remember any of the cast? People like Marie Clarke, Bernie Martin, Des McCormack, Marie McAuliffe, Kevin Rough and Maureen Reeves. In 1983 Austin’s daughter Irene was to play the part of “Calamity Jane” with us in the year of our Silver Jubilee.

The Society was a great place to meet people. Indeed lots of marriages have taken place over the years from the Society. One of the best shows to be staged in Drimnagh was “The Student Prince”. It was wonderful to be part of it and why not, with Patricia Cahill and John Comyn as our Leads. Patricia of course, being a local, was a great favourite with all the cast. This show was completely booked out on the last weekend and by public demand we had to repeat the show the following February. People came from as far away as Sligo, Dundalk and Waterford to see it. The admission price was 2/6d i.e. 12.5p in today’s money! Our next production was “Showboat” and the discovery of a local talent in our Parish. Her name was Helen Jordan. She played the part of Ellie, a song and dance girl. Helen went on to play Eliza Doolittle in “My Fair Lady” -a part she made her own – with Tommy Ebbs as Colonel Pickering and Jimmy McClathie as Henry Higgins. It was a super performance by all. Helen went on to do many shows around the country. Another Drimnagh girl who appeared with us for the first time in “Die Fledermaus”was the late Loretto O’Connor. She also appeared with us in “White Horse Inn” and “Showboat”. Loretto was a lovely person to work with and was brilliant on stage. Sadly, she departed from this world at a very young age.

In the early seventies the Society became a member of A.I.M.S. -The Associationof Irish Musical Societies. We had not long to wait for our first success with Tommy Ebbs, Best Comedian, as Rilles in “The Pyjama Game” and Best Producer in 1985 with “Orpheus in the Underworld”.

Tommy received many more awards, as also did our Society.1973 we had to form our own Committee and I became Chairman of the Society.Up to that time one of the Rev. Fathers in the Chair.  In my 27 years as a member of the Society, I have 14 as Chairman. Two other members have the Chair – Annette Malone and Brendan Coghlan.

Both Brendan and Annette have given service to the Society and have held every position on our Committee. Well done to both.From 1974 to 1978 our Society won many awards with “Die Fledermaus”,”Orpheus in the Underworld´, “Hello Dolly” and “Gypsy Baron”. Our Musical Director was Pat Dunleavy. Pat spent 14 years with us in Drimnagh and was a great person to work with.There was always a great social atmosphere in the Society in those years with parties being held in member’s homes on the last two nights of the show.

1983 was the Silver Jubilee of our Society. Our Show was “Calamity Jane” with Irene Gaffney. It was sponsored by E. P. Mooney, Long Mile Road. This was followed by a Dress Dance in the Shelbourne Hotel.

In 1984 we were invited to take part in the Waterford International Festival of Light Opera with our Show, “South Pacific”. The audience loved it; we did proud I can tell you. We returned to Waterford two years later with “Music Man” and we were very well received. But there is more to our Society than the cast on stage. What about those wonderful people who did the door-to-door canvas year in and year out- and maybe went back more than once. Then we have our Stage Staff. I believe we had the best stage crew of the Societies. We had great Stage Managers from the time of Noel Lindsey, Paddy Birmingham, and Noel Mullen to our present Stage Manager Paul Kelly. They were all great to work with. Everyone just got stuck in to make the show a success.

1988 was the Millennium year of Dublin, and our contribution was a first class concert in The “National Concert Hall. It was called Millennium Musical. We did a selection from all our shows over the years with eleven soloists and a chorus of 81 from our Society and the Church Choir. The night was completely booked out and a great success it was. We continued on with our shows over the next few years but found the going hard due to lack of support, so we changed over to variety for the last two years, and for the Parish Golden Jubilee we called it “Show time ’93” and thus ended a wonderful story of art, drama, dedication, fun, involvement, commitment.  Sad that it had to end. 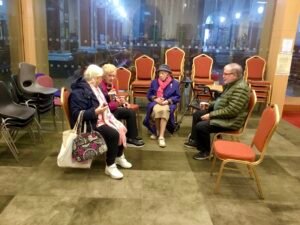 Our Lady of Good Counsel

Due to staff holidays the office will be open Monday, Tuesday & Wednesday mornings only from 9.15am-1pm, closed Thursday & Friday

Cookies Consent
To provide the best experience, Our Lady of Good Counsel uses technologies like cookies to store and/or access device information. Consenting to these technologies will allow us to process data such as browsing behaviour or unique IDs on this site. Not consenting or withdrawing consent, may adversely affect certain features and functions.
Manage options Manage services Manage vendors Read more about these purposes
Preferences
{title} {title} {title}